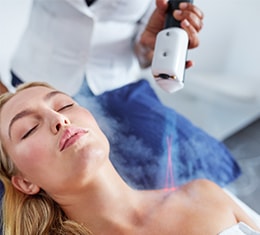 "I Can’t Handle Physical Therapy...I Can Barely Move!"  This New FDA-Cleared Technology May Be For You.

Salters Creek Medical Group is proud to include Terraquant Cold Laser in our office.

When the body has an injury the cells are damaged and fail to function within normal parameters. Energies from the Cold Laser penetrate deeply into the skin and work by restoring normal cellular function. Cold Laser uses a non-heat producing light laser, which is locked at a specific wavelength that is optimal for treatment and can penetrate deeply into tissue. Cold Laser or Low Level Laser Therapy is emerging as a premiere therapeutic modality in the healing arts community. The biological effects of Low Level Laser Therapy have been shown to significantly accelerate and enhance the body's natural defense and repair abilities. By reducing the duration of inflammation as well as enhancing specific repair and healing processes, Low Level Laser Therapy has been proven to provide pain relief, reduce cell damage due to the injury and resulting loss of function. Low Level Laser Therapy enables the body to have a more rapid repair and stronger tissues once healed. Physiologic effects include improved metabolism, circulation and tissue healing. Laser therapy may be useful for the following:

Professional Athletes: To treat top athletes in order to return them to competition at a much accelerated pace. If you remember, a few years ago, Lance Armstrong and the US Postal Service team were involved in quite a few bad wrecks, yet they were able to race the next day. According to Jeff Spencer, Armstrong's chiropractor who treated him with Cold Laser, if an injured athlete can get in for laser treatment within 2-3 hours of the injury, rehabilitation time can be cut in half.

Burn Victims: To accelerate wound and burn healing, at a rate 25-40% faster and with less scarring. This is an excellent demonstration of external healing reflecting what is happening on the cellular level, where internal healing is often neither seen nor felt.

Nerve and Spinal Injuries: To rehabilitate severed nerve bundles, at a rate of 300% faster than a control group tested in a University of Health and Sciences, Bethesda, MD., (research study conducted by Anders and Broke). This was after only 14 daily, 90 minutes treatments. It suggests promising results will be found in the future for peripheral nerve damage and possible spinal cord injuries.

Other Injuries: To increase the range of motion (ROM), to increase muscle strength, to decrease pain and inflammation and to accelerate overall healing time for a variety of injuries. Chiropractors use the cold laser for whiplash-strain-sprain, chronic frozen shoulder, long standing TMJ problems, carpal tunnel syndrome, fibromyalgia, sinusitis, etc.

The Cold Laser, or Low Level Laser Therapy, can be used for:

Lasers are painless, sterile. No undesirable side effects. Much more affordable than surgery.

"Light therapy is not a new concept. The sun's photonic rays cause a seed to sprout through RNA and DNA changes. The sun's rays are full-spectrum light, which means many wavelengths are present (400-800 Nanometers), but only one specific wavelength, or frequency, causes the seeds to germinate. In 1924 Bose and Einstein, great men of science, predicted the Laser. Laser is an acronym for Light Amplification by Stimulated Emission of Radiation.

In 1978, Dr. Frolich helped to establish the Wave Particle Theory, which now forms the foundation of quantum physics and defines the mechanism of life, as we now know it. Human cells, tissue and organs have specific frequencies that regulate important cellular functions such as protein synthesis, cellular division and communication. Frolich used quantum physics to explain that a cells living matrix must produce coherent or laser-like oscillations, unique resonances. He stated that these resonances serve as signals that integrate processes such as growth, injury repair, immune mediation and the overall functioning of the organism. Each molecule, cell, tissue and organ has an ideal resonance frequency that coordinates its activity. Using certain laser frequencies can alter or balance the body's systemic defense and repair mechanism.

In 1994, Dr. Smith stated that pathologies manifest themselves as chemical imbalances with the underlying cause being electromagnetic. By applying a specific frequency, normal function and balance can be restored. Physicists Schawlow and Townes brought the laser into modern medical arenas, where they are being used for a variety of treatments. Most of the lasers used in the medical field have been High Frequency Hot Lasers, which are catabolic (destructive) in nature such as the ones used in eye surgery. Cold Lasers are anabolic, or regenerative in nature.

Laser therapy is based on photochemical and photobiological effects of the cells and tissues. With laser light, cell functions are stimulated, especially the increase of a cell’s ATP (energy). This increase in ATP synthesis is associated with increased cell metabolism, increased collagen synthesis, stimulation of DNA formation, improved immune system function and increased new formation of capillaries. The laser also has been shown to increase neurotransmitters (serotonin), to increase and enhance tissue regeneration through increasing fibroblasts and keratinocytes. The laser can also increase antioxidants and accelerate bone and scar healing.

Research shows that every cell has a least three kinds of basic receptors for neurotransmitters (i.e., serotonin, dopamine), hormones (insulin, thyroid, estrogen) and photoreceptors. The laser affects the human cells through the photoreceptors, causing a physiological effect. Nerves, for example, are affected by the temperature, the pH within the cell, the oxygen available, and the amount of ATP (a cellular unit of energy) available. The laser stimulates ATP production and oxygen at a cellular level, which activates enzymatic cascades that help the cell to detoxify itself. These changes activate the cells and nerves and set up an environment in which they function best.

Accelerated healing, the primary goal for any kind of injury, is hard to demonstrate in one laser session. However, your chiropractor can demonstrate the ability to increase your range of motion (ROM) and increase muscle strength by testing you before and after the laser treatment. By increasing your ROM, you are preserving the function and structure of your cartilage and discs. Movement brings vital nutrients and fluids to cartilage and discs. The less your neck, spine or joints move, the sooner breakdown begins. Joint degeneration, or cartilage starvation, is osteoarthritis, which can cause considerable pain and is progressive in nature. Disc breakdown is degenerative disc disease. This can cause bone spurs pressing on nerves, causing pain, such as sciatica. The muscle strength test is performed in order to test nerve root function, not just muscle performance. Testing the deltoid strength bilaterally, for example, is evaluating the function of the C5 nerve root. Restored muscle strength actually indicates that the nerve root has been reactivated. With a properly functioning nervous system, balanced muscle strength is available to optimally perform three vital functions: to move the body and joints, to stabilize joints, and to inhibit pain at the spinal cord level.